Nordic Semiconductor today announces the availability on Kickstarter of a Nordic nRF52832 SoC based Bluetooth® low energy (formerly Bluetooth Smart) beacon, named Puck.js, that is said to be so simple to program almost anyone can do it wirelessly from a website using a graphical editor or easy-to-learn JavaScript instead of C or C++ traditionally used by Bluetooth low energy beacon developers.

“Most manufacturers conveniently gloss over the difficulties of programming their hardware, and other beacons are provided without software or left crippled by their boring factory-installed firmware,” says UK-based Puck.js creator, Gordon Williams. “Puck.js is different. It comes with our Open Source JavaScript interpreter ‘Espruino’ pre-installed, which makes it incredibly easy-to-use and means you can get started in just seconds, without any prior programming experience.”

The intentionally hacker-friendly Puck.js is open source, supports both the iBeacon and Eddystone beacon formats, and will be supplied with firmware updates for the forthcoming Bluetooth v5.0 specification that will quadruple the range and double the speed of Bluetooth v4.2. Puck.js has a circular 35mm diameter form-factor that is 10mm thick, with a silicone rubber cover and plastic base. It is powered from a CR2032 coin cell battery and includes a magnetometer (digital compass), user-assignable tactile button, and four (Red, Green, Blue, and Infrared) LEDs.

Thanks to the Nordic Semiconductor nRF52832 SoC, the Puck.js benefits from an extremely powerful ARM® Cortex®-M4F processor, 64MHz clock speed, an extremely generous 64kB of RAM and 512kB of Flash, built-in Near-Field Comms (NFC™), Over-the-Air firmware updates, 12-bit ADC, timers, SPI, I2C, and serial interfaces that can be used on any available pins, plus a temperature sensor.

Williams says that in summary this means the Puck.js can measure rotation (e.g. using the Puck as a control knob), light, temperature, magnetic fields (e.g. magnets used on doors to detect opening and closing or water level via a magnet on a float), can control Infrared devices, and produce any color light.

“JavaScript is probably the most popular programming language at the moment and the majority of web developers, makers, and students at school wouldn’t usually have used C or C++,” Williams continues. “So what I aimed to do with Puck.js was lower the barrier-to-entry and make development easier and more fun – allowing a whole bunch of people to use Bluetooth low energy beacon and IoT technologies that may otherwise be restricted to professional embedded developers.”

Williams says Puck.js is like a development kit that’s also a finished product. “You insert a battery, put the case on, and it’s a ready-to-go Bluetooth low energy beacon straight-out-the-box with no wires of software required,” he adds. “At the same time it’s very easy to add new functions and features for home automation projects, IoT prototyping, or education purposes.”

ANT Wireless announced the formal production release of the ANT and concurrent ANT/BLE protocol stacks designed for Nordic Semiconductor's nRF52832 SoC. The S212 (ANT only) and the S332 (concurrent ANT/BLE) are now available for licensing and download at thisisant.com on the nRF52832’s SoftDevices tab.
https://www.thisisant.com/developer/components/nrf52832/#tab_protocol_stacks_tab%20%20or%20contact%20us

Note: In a move to simplify the licensing process, ANT Wireless has combined the evaluation terms of use and the commercial terms of use into a single license agreement.
By Raytac Corporation at July 28, 2016 No comments:

MDBT42Q / MDBT42Q-P which are built based on Nordic nRF52832 solution.
The modules now are already in mass production stage for volume shipment.

Raytac would like to announce that MDBT42Q Series Development Board now is available.
Developers may access through Raytac's Distributors or direct to Raytac Corporation for inquiry. 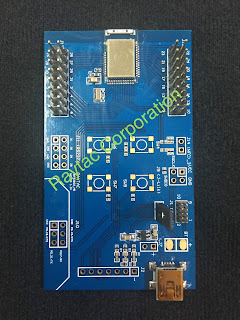 What is dBM?
From Spec sheet, we can find the output power always stated as dBM.
For example:
Nordic nRF52832
Transmitting power (+4dBM~-20dBM) / Receiving Sensitivity (-96dBM)

dBm is the unit for radiowave, it is a way to express the comparison between the reference signal value

The reference value is 0dBM at 1mW, the unit represented as shown below

What is Eddystone
Eddystone is the standard for the beacon using the BLE that Google announced in July 2015.
It is available includes a number of broadcast frame types on all platforms that use the BLE, such as iOS as well as Android open standards, designed to give developers and venue owners flexibility in their beacon developments and applications. Eddystone helps beacons using the Proximity Beacon API, including adding attachments in the cloud and monitoring their health.

Feature
Eddystone's biggest feature is not intended to become a black box such like iBeacon service, works only for iOS. Eddystone program code is designed to be an open standard and has been published in GitHub.

The difference between iBeacon and Eddystone is the "broadcast frame type"
iBeacon transmits ID only (1 Type)
Eddystone transmits not only ID, but also URL and TLM. (3 Types)

Unlike iBeacon, Eddystone provides target users to receive the message through URL without app installing as long as the Bluetooth is turned on.

Packet
Eddystone is allowed to transmit 17 bytes every packet.
Thus, in case of URL broadcast frame type, the data must be downsize to fit in this 17 bytes limitation

User Scence Example
Eddystone is designed to compensate the demerit of iBeacon's, which is standardization.
However, iBeacon so far is still the most well-known and widely applied service right now as well as iPhone is the most well selling single mobile phone all over the word.
Thus, the trend of which one will prevail the competition between Eddystone Vs. iBeacon is still a interesting topic and lead the delimma for developers and user to observe closely.

MDBT42, based on Nordic nRF52832 WL-CSP solution, is about to be armed and targeting for IoT industry.
Raytac's module line in 2016 now has become ready and all well loaded.

The nRF52832 WL-CSP has a super-compact 3.0 by 3.2mm footprint compared to the standard 6.0 by 6.0mm footprint of its larger but conventionally-packaged nRF52832 QFN48 cousin, yet offers the same full single-chip feature set and best-in-class, ultra-low-power application operation. This includes a powerful on-board 64MHz ARM® Cortex®-M4F processor that enables protocol and application task processing to be completed in unprecedentedly short time-frames, thus allowing power-saving sleep modes to be entered much quickly compared to competing devices.

Holstad adds: “The evolution of wearables to date has only ever gone one way: ever increasing performance and functionality in ever-slimmer, lighter, form factors. The nRF52832 WL-CSP is by a clear margin, the smallest and most advanced Bluetooth low energy SoC available on the market today.”
By Raytac Corporation at July 06, 2016 No comments: